In legal terms, citizenship is the condition of the natural person (called citizens) to which the legal order of a state recognizes the fulfillment of civil and political rights. Citizenship, therefore, can be seen as a status of the citizen but also as a legal relationship between citizen and state.
The matter of citizenship is regulated by the Organic Law of 5 February 1992 n. 91, and the implementing regulation, Decree of the President Republic 12 October 1993 n. 572.

A person is an Italian citizen if:
1. Italian father or mother comes from wherever the birth takes place. If one parent is Italian, in each case, the child will be an Italian citizen.
2. born in Italian territory. Only in the following cases: a) children of unknown parents, b) children of stateless (no nationality). In this case the parents have to prove their status as stateless; c) children of foreigners who do not follow the citizenship of the parents for the law from state to state, according to art. 2 of Presidential Decree 572/93.

A foreign citizen by birth, have certain requirements, or occurring under certain conditions, makes a statement which expresses the wish for citizenship. hypothesis:

The granting of citizenship is possible for foreign nationals married to an Italian citizen, in the absence of any impediments arising from judgments of conviction or the presence of reasons that relate to security of the Republic. The foreign spouse of an Italian citizen acquires Italian citizenship by residing legally in Italy for at least 2 years (1 year in the presence of the children of the marriage or adopted) or, if he resides abroad, after three years from the date of marriage. Citizenship is granted at the request of a Decree of the Minister of the Interior, which becomes effective only after the oath before the registrar of the municipality of residence before the authority or the diplomatic-consular authorities. The question becomes Italian citizen the day after taking the oath. When the time limits described above from the date of the marriage in question, may apply to the Ministry of the Interior for the acquisition of Italian citizenship. The application shall be affixed on the models which is available at the One Stop Shop Services (Consulates abroad), and presented to the Prefect responsible for the place of residence or consular authority in the event of residence abroad . The application shall be accompanied by proof of certification requirements The request is subject to payment of a contribution of € 200 (payment to be made in Mail). The decree of the Ministry of the Interior which is granted Italian citizenship is transmitted by the Prefecture of the Civil Status Officer of the municipality of residence of the applicant, and notify the person, who has six months from notification to make the required oath before the registrar of the municipality of residence or, if resident abroad, before the diplomatic-consular authorities.

The Act identifies categories of foreign persons who may apply for Italian citizenship. Such persons are required, in addition, periods of legal residence on Italian soil of varying duration. The residence is legal when the alien is in possession of valid residence permit and is registered with the Registry Office.

Citizenship, in this case, is given at the request of a Decree of the President of the Republic. The effectiveness of the decree, however, is conditional upon oath, before the registrar of the municipality of residence before the authority or the diplomatic-consular authorities. The question becomes Italian citizen the day after taking the oath. The applicant must submit an application to the Ministry of Interior. The request is subject to payment of a contribution of € 200 (payment to be made ​​in Mail). The application shall be written on special forms distributed at the One Stop Shop Services (Consulates abroad), and presented to the Prefect responsible for the place of residence or consular authority in the event of residence abroad . The application shall be accompanied by proof of certification requirements. The decree of the President of the Republic with which it is granted Italian citizenship is informed by the Prefecture of the Civil Status Officer of the municipality of residence of the applicant and sent to the claimant himself, who has six months from the notification, to make the required oath before the registrar of the municipality of residence or, if resident abroad, before the diplomatic-consular authorities.

By virtue of the simultaneous operation of law 13 June 1912 n. 555 and provisions of law relating to foreign nationals of many countries of ancient Italian migration, generation born on the territory of emigration from father acquires an Italian citizen by birth, both the possession of Italian citizenship as a national state of birth.

Hence the real possibility that the descendants of the second, third, fourth generation and beyond of our emigrants are invested Italian citizenship.

This possibility is further extended for members of families of ancient Italian origin who were born after 1 January 1948, as from that date, must be considered, according to the dictates of judgment no. 30 of 9 February 1983 the Constitutional Court, also Italian citizens children born to mothers in the possession of Italian citizenship at the time of their birth or recognized by the mother or whose maternity has been judicially declared.

It follows that even the descendants of our immigrant or emigrant daughter of our citizens are regarded as firm jure sanguinis Italian for maternally derived if born after 1 January  1948, date of entry into force of the Italian Constitution.

All cases the transmission of italian citizenship jure sanguinis

When you have only men in the line of blood (Father> Grandfather> grandfather> great-grandfather) always will always have the right to Italian citizenship, regardless of generation.

When you have women in the line of blood (the mother in this example) then you must be born after 01.01.1948 for the right to recognition of Italian citizenship.

When you have women in the bloodline (grandmother in this example) and then mother or father, you must be born after 01.01.1948 for the right to recognition of Italian citizenship.

When you have women in the bloodline (her great-grandmother in this example) then your grandmother or grandfather must have been born after 01.01.1948 for the right to recognition of his Italian citizenship.

PROCEDURE FOR RECOGNITION IN ITALY

The powers to make the recognition of Italian citizenship is, for the foreigner of Italian origin residing lawfully in the Italian state, the mayor of the municipality of residence. Its possible to begin the process of getting Italian citizenship in Italy as a tourist or student visa or work, and you can not start when the ‘is concerned with the study or work visa expired, or has already passed the period of 90 days as a tourist in the countries of the Schengen Treaty.

Together with the instance of recognition (to be made legal paper) must be submitted the following documentation:

In the case where the process starts in Italy acts (original) trained abroad by foreign authorities must be legalized by the competent Italian diplomatic and translated into Italian. The translation must be certified to the foreign text by the Italian diplomatic authority or by a translator in Italy that an oath before the Clerk of the Court (sworn) has made its official translation.

Considering the administrative delay of more than 10 years of the Italian Consulates  for the effective recognition of Italian citizenship, the recognition of citizenship can be done by judicial means directly in Italy, in the Court of Rome.

It is the right of the Italian descendant, to be recognized and declared an Italian citizen by blood right.

The judicial process is an excellent tool for the descendants of Italians who want to obtain recognition of the right to citizenship without living in Italy.

This type of judicial proceeding does not require the applicant to move to Italy, and can therefore be fully carried out by means of a judicial power of attorney issued to an Italian lawyer who will represent the applicant in the Court.

The average term for completing Italian citizenship through the courts would be an average of 12 months.

Recent jurisprudence from the Court of Rome, judged the actions proposed by Italian descendants (via paternal patents) to be totally valid, which were motivated by the long wait for recognition of Italian citizenship by the Consular Authority.

To bring action before the Italian Court , the applicant must prove:

During the process, the Court of Rome examines the documentation proving the offspring and issues a court order with which it recognizes the Italian citizenship of the applicants, ordering the competent authorities to transcribe the acts.

After the sentence has become final, we have sent the documents to the competent bodies, so that the claimants can obtain the Italian birth certificate, with which they can register with the Register of Italian Residents Abroad and request the passport at the Italian Consulate in the region where they live.

JUDICIAL PROCEDURE OF ITALIAN CITIZENSHIP BY WOMEN DESCENDENCE (OR ITALIAN DESCENT) born before 1.1.1948.

The right to the Italian citizenship may be recognized even to those who were born from woman, descending from Italian ancestor emigrated abroad before 1/1/1948  but only in a judicial court.

In relation to the transmission of Italian citizenship jure sanguinis through the mother should be mentioned the judgment of the Court of Cassation n. 4466 of 25 February 2009. The United Sections, have determined that, due to the judgments of the Constitutional Court. 87, 1975 and n. 30, 1983, shall be entitled to the “status” of an Italian citizen born abroad to the applicant by the son of Italian woman married a foreign citizen in the vigor of L. n. 555 of 1912 which was, therefore, deprived of Italian citizenship because of marriage. Although sharing the unconstitutional principle occurred, according to which the declaration of unconstitutionality of the pre-constitutional rules have effect on relationships and situations that are not yet exhausted on 1 January 1948, unable to feed back over the entry into force of the Constitution, the Court held that the right to citizenship as “status” permanent and indefeasible, unless the extinction due to waiver by the applicant, is lawful at all times (even in case of previous death of the ancestor or parent from which derive recognition) to the effect continued even after the entry into force of the Constitution of ‘unlawful deprivation due to the discriminatory rule declared unconstitutional.

Subsequent to that decision in 2009 the judges of the Court of Rome have issued several rulings recognition of Italian citizenship to their children and descendants of an Italian citizen, born before 1948. Not having the Italian Parliament transposed into law the judgment of the Supreme Court, you cannot get citizenship jure sanguinis through the maternal promoting its application to the Consulate or to the appropriate office of the Civil Status of Italian municipalities. For the descendants of Italian woman (or Italian descent), born before 1948, there is a chance in court to obtain the recognition of Italian citizenship.

LEGALIZATION DOCUMENTS FOR CITIZENSHIP WITHIN 90 DAYS

In Italy it is also possible to appeal court order to force the Consulates, which currently have waiting lists for years to legalize the documents within ninety days. It  is possible in fact  to obtained from the Regional Administrative Court (TAR),  a judgment that finds the failure of the Administration of Foreign Affairs for the conclusion of the proceedings preordained to legalize documents and asked for the orders to the same effect, providing positive feedback the demand for legalization of documents within the period of days 90 (ninety) by notification from the communication of this administratively. The judicial process takes about 8-10 months. The successful conclusion of the procedure will allow the person to appear at the Consulate to ensure the legalization of documents necessary to have recognized their right to citizenship. 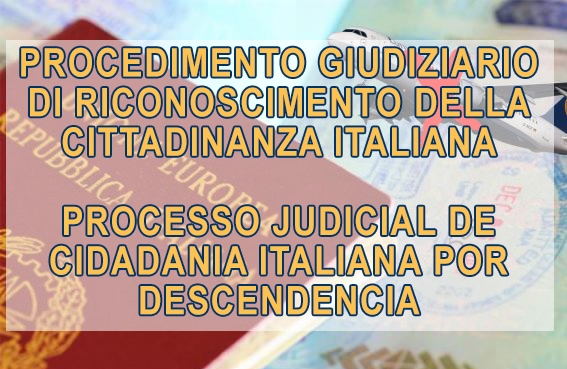