JUDICIAL PROCEDURE OF ITALIAN CITIZENSHIP BY WOMEN DESCENDENCE (OR ITALIAN DESCENT) born before 1.1.1948.

The right to the Italian citizenship may be recognized even to those who were born from woman, descending from Italian ancestor emigrated abroad before 1/1/1948  but only in a judicial court.

In relation to the transmission of Italian citizenship jure sanguinis through the mother should be mentioned the judgment of the Court of Cassation n. 4466 of 25 February 2009. The United Sections, have determined that, due to the judgments of the Constitutional Court. 87, 1975 and n. 30, 1983, shall be entitled to the “status” of an Italian citizen born abroad to the applicant by the son of Italian woman married a foreign citizen in the vigor of L. n. 555 of 1912 which was, therefore, deprived of Italian citizenship because of marriage. Although sharing the unconstitutional principle occurred, according to which the declaration of unconstitutionality of the pre-constitutional rules have effect on relationships and situations that are not yet exhausted on 1 January 1948, unable to feed back over the entry into force of the Constitution, the Court held that the right to citizenship as “status” permanent and indefeasible, unless the extinction due to waiver by the applicant, is lawful at all times (even in case of previous death of the ancestor or parent from which derive recognition) to the effect continued even after the entry into force of the Constitution of ‘unlawful deprivation due to the discriminatory rule declared unconstitutional.

Subsequent to that decision in 2009 the judges of the Court of Rome have issued several rulings recognition of Italian citizenship to their children and descendants of an Italian citizen, born before 1948. Not having the Italian Parliament transposed into law the judgment of the Supreme Court, you cannot get citizenship jure sanguinis through the maternal promoting its application to the Consulate or to the appropriate office of the Civil Status of Italian municipalities. For the descendants of Italian woman (or Italian descent), born before 1948, there is a chance in court to obtain the recognition of Italian citizenship. 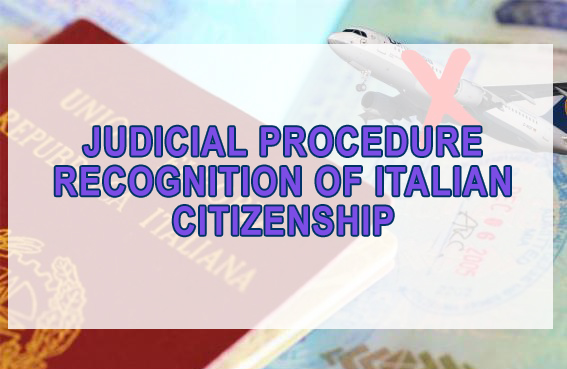